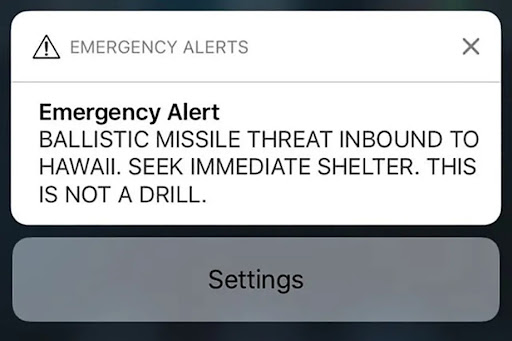 The Hawaiian Trail and Mountain Club christened this route as "Bay Bum Ridge" and I am unaware of the hows and whys of the naming but Steve Poor and I hiked this on a recent Saturday, the one where Hawaii was in an uproar due to a missile launch from North Korea that never was . Actually, the text message that went awry came out a few minutes past eight, and at that time I was at home in Kaneohe getting ready for the hike, which was supposed to begin at 9 a.m. at the end of Ala Aolani Street . I'll admit that I was a bit alarmed upon seeing the text (see below) but when the expected civil defense warning sirens never came (at least not where I live), I figured it was a false alarm or a hoax. It turns out that if was the former. In any case, the hike was on and I headed to Moanalua Valley where I met Steve, who was oblivious to all the chaos. We did see some hikers beating a hasty retreat out of the valley and upon questioning them, they said they were milit
Read more 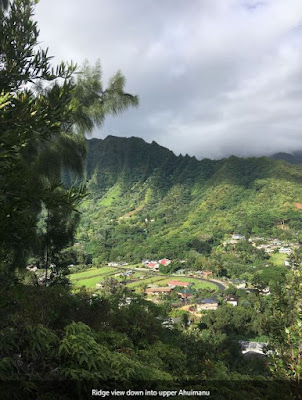 I hiked this windward Oahu ridge with some friends the past three weekends. It's not very long nor perilous but it is something few folks have hiked. Along for our most recent trek were my brother Alika Turner, Steve Poor, and Scott Villiger. We met at Woodridge park (adjacent to the intersection of Hui Io Street and Alawiki Street) in Ahuimanu (or, more familiarly, Kahaluu) and followed a not-oft-used trail at the end of Hui Io. There is a narrow hole in a fence to get thru and then the trail becomes more pronounced, at least for a short distance. It seems to me that this more-pronounced trail, because of its width and beaten down demeanor, was made by and for dirt bikes and/or quads but we saw nor heard no sign of these while we hiked. Eventually, the dirtbike/quad trail veered off the ridge and down into Ahuimanu Valley (to the right of the ridge we were on) and we did not follow it and instead opted to stick to the ridge, the trail along which became more of a
Read more 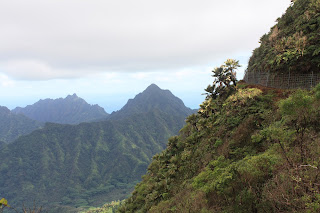 Patrick Rorie (prorieandmnt@GMAIL.COM) says: The fence crew hired by the State NARS has finished installing a fence along the entire section of the Ko'olau Summit Trail (KST) between Pu'u Pauao and the pu'us near the Schofied-Waikane terminus, considered by some to be the Kalalau/Na Pali Coast Trail of Oahu. The fence is a terrible eyesore, and panels have been placed where the natural cliff of the contour could have been utilized to keep pigs out. Using the natural cliffs would have saved tax payers money and lessened the visual blight of the fence. Instead, in typical State government fashion, the State NARS used panels along every inch of the trail so that they will receive the same funding amount for the next exclosure. The unnecessary panels should be removed to lesson the visual blight of the fence along this magnificent stretch of the KST. On a positive note, this stretch of the KST has been cleared and regraded, making it easier to hike. Please take a look
Read more

A question about a plant 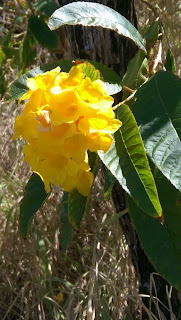 Keith Palmer (krpalmer@juno.com) queried: Can someone please tell me what shrub / tree this is? Found on Puu O Hulu Kai. I SHOULD be able to find it easily online but not having any luck. Thank you If anyone knows, please contact Keith. Mahalo.
Read more

The fencing of upper Schofield trail 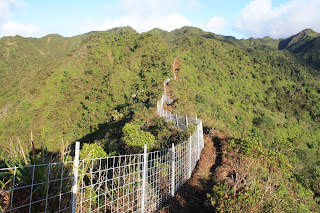 It's been some years since I last hiked the Schofield trail. In fact, I'm uncertain if I've hiked it in the current century. I know I hiked it in the previous century, including one time I, along with others from the Hawaiian Trail and Mountain Club, hiked up the Poamoho trail, crossed along the crest on the Koolau Summit Trail, and descended Schofield. That was in 1999. . A couple decades later, the upper part of the trail is now fenced, as evidenced by the pics below, which were provided courtesy of Patrick Rorie in 2017 via OHE-L mailing list Regarding the fencing of the Schofield Trail. I'm not sure if I like it or not. As such, I suppose I'm sitting on the proverbial fence regarding the fence. The fencing, by the way, is an initiative of the Koolau Mountains Watershed Partnership, one objective of which is to "protect the watershed against incipient invasive weeds and feral animals" [ source ].
Read more 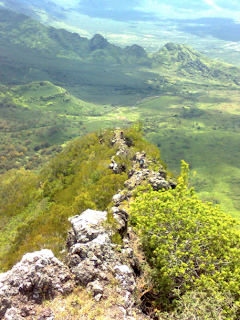 From the Oahu Hiking Enthusiasts Archives Date: Tue, 20 Mar 2001 09:48:03 -1000 From: Kapa Reero (kapareero@lycos.com) Subject: Kawiwi-Ka'ala-Waialua Did a great hike with a dude named Lawrence Muredo on Sunday, March 11. Dayle Turner and other super hikers had the right idea, but less than ideal conditions kept them from completing the entire jaunt in November of 2000. This write-up is not meant to shame them. Lawrence and I had the luxury of picking a perfect day to do the traverse. The weather? A drop-dead gorgeous day! Pleasant temperatures, gentle trade wind breeze, both mountain ranges (Ko'olau, Waianae) completely clear of cloud cover. We met on Farrington Hwy in front of Waialua High at 8 am and carpooled to Waianae Valley. Following final preps, Muredo and me set out on foot from the Waianae Kai dirt parking area at 9:12 am and gained elevation via a paved road. After entering a scrub haole koa forest, the two of us meandered about the lower environs until
Read more 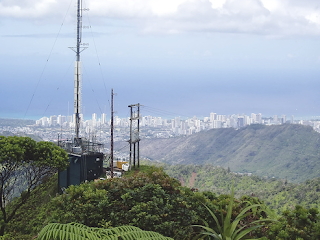 From the Oahu Hiking Enthusiasts archives Date: Thu, 15 Mar 2001 19:59:07 -1000 From: LastKoho (lastkoho@yahoo.com) Subject: A Walk on the Spinal Side The plan hatches when Mrs. Koho reads about a recent Sierra Club hike from Wiliwilinui to Lanipo . We decide to follow suit. That is, we'll hike to the end of the Wiliwilinui trail, turn left, hike on the Koolau crest to the end of the Lanipo trail and turn left again and trek back to civilization. We hope the path, given that it's only been a few weeks since the Sierra Club outing, will not be too badly overgrown or too treacherous on this, our first, Koolau summit jaunt. And so it is that we find ourselves in separate cars heading up Sierra Drive to Mauanalani Heights, parking one vehicle at the Lanipo trailhead. Together, we then coast back down Sierra Drive and ultimately up into Waialae Iki where we park at the Wiliwilinui trailhead after obtaining a permit at a guard shack. It's mid-morning, a weekend, and, sli
Read more
More posts