I just returned from the Big Island yesterday where I had to attend a work-related meeting, and with a free day prior to the meeting, I decided to visit the Hawaii Volcanoes National Park to hike the 14.6-mile Ka'aha loop described in Stuart Ball's backpacking book.

Early Monday, I arrived in Hilo via the Hawaiian Air early bird flight, grabbed a rental car, stopped at Walmart for some supplies and then McDonald's for some breakfast, and then headed up Hawaii Belt Road, bound for HVNP. Once at the park, I stopped at the Visitor's Center to check out the trail conditions ("Go for it!" said the wahine ranger at the desk) and to obtain a camping permit for Namakani Paio (none needed), where I ended up spending Monday night.

From the visitor's center, the drive to the trailhead is about 15 miles, nine on the narrow but not-too-twisty Hilina Pali Road. On HPR, I passed Kipuka Nene, a campground that will probably be closed permanently since the land it occupies is part of a nesting area used by Nene, the state bird. To replace Kipuka Nene, a new camping area is under construction along HPR. When that'll be completed I'm not sure.

I arrived at the Hilina Pali trailhead (elev. 2,280) at 9:15 and parked by two other vehicles there. A young couple was in the lookout shelter prepping their gear for a backpack down to Halape. After I checked my gear, which included eight liters of water, I shoved off at 9:30, heading southwest on the Ka'u Desert Trail for the first 4.8-mile leg to Pepeiao Cabin.

This segment was quite pleasant: mostly downhill over ancient pahoehoe flows covered by grass and smatterings of mature ohia trees. On most of the route, I could have enjoyed sweeping views of the coastline below, but vog made for chalkly visibility. Piles of stones (ahu) marked the trail and on occasion these were helpful in keeping me on course.

I arrived at Pepeiao Cabin (elev. 1,680) at 11 and spent a few minutes exploring the rustic, three-bed structure, which Ball says is infested by roaches and mice. While there, I didn't see these pests, but I did make an entry in the cabin logbook, noting that the previous entry was made a few days prior on 1/1/99 by a guy who dayhiked the same route I intended to use.

From the cabin, the next leg is six miles on the Kaaha Trail. The route to Kaaha starts out due south, then veers southeast to reach the coastline, and finally turns northeast parallelling the coast to reach the Kaaha Shelter. For me, the first three miles was a joint-jarring descent downslope to the coastline. In many places, the trail wasn't obvious and the ahu were quite helpful in keeping me from straying off line into the vast lava fields. Before the trail leveled out, I passed features Ball mentions in his book, including the last ohia tree and Kukala'ula Pali.

I arrived at the coast around 12:30 and ate lunch atop an eroded pu'u that is part of Napu'uona'elemakule ("Hills of the Old Men"). From my vantage point, I had nice views down to a rocky cove with sea arches at both ends. Ball includes a picture of one of these arches in his book, along with a couple other shots of sights along the route. The vog didn't relent, so views upslope to the spectacular Hilina Pali were less than clear.

For lunch, I spent only as much time as needed to eat a couple of sandwiches and drink water, and then I shoved off for Kaaha Shelter. Instead of following the trail initially, I hiked along the coastline, as Ball suggests, stopping at one point to pick some opihi, a skill I'd honed during a past backpacking trip with my friend Bill Melemai. For some reason, I didn't have the heart or appetite to eat these on Monday, so after harvesting them and snapping a photo, I tossed them back into the sea.

My opihi quest done, I left the coastline and headed inland to rejoin the ahu-marked trail. At one point, I felt water drenching my back, a result of the hose of my camelback coming undone. Because I acted quickly, I only lost a liter of water, and the excess in the bottom of my pack I poured over my boonie cap to cool my head as I hiked. Fortunately, I had started out with plenty of H20 and a quick inventory indicated I had an adequate supply to see me to the end. I should note I carried a hefty amount of water because the trail traverses arid, waterless territory. Plus, a couple years ago, a hiker died on this trail after running out of water. Knowing that, I wanted to avoid a similar fate.

The segment from my lunchspot at Napu'uona'elemakule to Kaaha is about three miles and crosses mostly level ground, mostly over old pahoehoe flows. This is a remote, lonely stretch of trail (the whole loop is, for that matter), and at times I felt like Charlton Heston hiking through the wilderness when he first crashed on the Planet of the Apes. Half expecting to see the hide of an ape stretched atop poles on the next pu'u I encountered, I also reminded myself to stay attentive to foot placement because an ankle or knee injury would put me in a bad way, far from medical assistance. Granted I had a cell phone, but I never checked to see if I could hit a repeater from my locale. Anyone know?

At one point, I thought I saw other hikers moving toward me in the distance, but this vision turned out to be imaginary. What I actually saw was a large driftwood log, bleached white by the sun, that stood out prominently against the bleak blackness of the pahoehoe fields. Apparently, the heat waves made the log appear to move, and when viewed from afar, an image of a hiker was conjured in my mind. But a hiker it wasn't, and in a way I was relieved because I felt fortunate to have the entire stretch of coast to myself.

Around 2 p.m. I arrived at the Kaaha Shelter, where I made an I-wuz-hea entry in its logbook and checked to see if water was available from the tank there (it was). From the shelter, a three-walled, floorless strucutre I wouldn't feel comfortable sleeping in, I walked a couple hundred meters to a rocky cove, where I took a quick dip, snapped some photos, popped a couple aspirins, and readied myself for the home stretch--a tough 3.8-mile ascent (2,300 foot vertical gain) back to the Hilina Pali trailhead.

After a stiff initial climb just past the shelter, the first two miles are relatively gentle, with the trail ascending more ancient pahoehoe flows. About halfway through this segment, I encountered a group of four--an older and a younger couple--heading for Ka'aha. Not shouldering big packs, they were obviously dayhiking. We only uttered passing hellos, but in my mind I felt like warning them they'd likely not make it back to the HP trailhead by sundown based on their pace and the time of day when I encountered them. I said nothing though, thinking they were the best judges of their fitness, pace, and ability to get to where they were going and return. Hopefully, they made it out okay.

While making my way upslope on the gentle ascent section, I marveled at the awesomeness of the Hilina Pali. I'd never hiked the trail that switchbacks across its face, and as I moved along, I kept looking at the pali, wondering where the trail up it might be. Some sections were plainly too sheer and out of the question as possibles, but some places looked more reasonable than others. Where ever the switchbacks were, I'd have to hike them to reach the top.

My fixation on the pali was broken momentarily when I came upon an ahu with hundreds of opihi shells laying around it. In my imagination, I had visions of a couple local guys, guzzling some cold ones while slurping opihi as pupu to lighten their load before making the big climb of the day. Whether true or not, I'll never know, but picturing this scene helped me forget the discomfort I was beginning to feel from hours I'd spent hiking across the lava fields.

Near the base of the pali, I reached a signed junction where one trail headed to the right, eventually leading to Halape, and another headed left toward Hilina Pali. Left I went, following ahu for several hundred meters before the big uphill attack of the 22 (says Ball) switchbacks began.

Initially, I tried to keep count of the switchbacks, but the transition from one to the next came so slowly I felt mentally distraught by the seeming eternity of the climb. I suppose fatigue played a part in my less than optimal well-being; the vog, also, may have contributed to the nauseousness I felt since I've heard that breathing it for long periods of time during periods of strenuous activity isn't recommended.

So I stopped counting after five and just concentrated on trudging forward steadily.. As tired as I felt, I tried to push the pace, not that I wanted to get out by a certain time, for I'd certainly reach my car well before sundown. Instead, I mushed on as quickly as I could, thinking if an earthquake hit while I was on the switchbacks, a hail of boulders from upslope would rain down on me. And there really is no cover to seek in such a scenario. Maybe I'm being melodramatic, but it's a natural state when looking up at steep slopes covered by loosely-lying thousand-pound rocks.

My seven-hour, 14.6-mile day of hiking ended at 4:30, when I reached my rented Toyota Camry at the Hilina Pali trailhead. Without pause, I fished out a 2 liter jug of grape juice from the trunk and proceeded to guzzle away. I still had a half liter of water remaining in my pack, but the juice was much more delicious and welcome.

After packing up, I made the return drive to park headquarters and then on to Namakani Paio, a HVNP-run campground where I pitched a tent, cleaned up, ate dinner (chili, nacho chips, sweet bread rolls, hot cocoa, fig bars), and spent a relaxing, albeit chilly night.

On Tuesday morning, I ate breakfast, cleaned up, packed my gear, and drove to Hilo for my committee meeting at Hawaii Community College. I caught a 4 p.m. flight back to Honolulu.

In all, it was a short but interesting trip to the Big Isle.

Posted by Oahu Hiker at 11:08 PM Links to this post 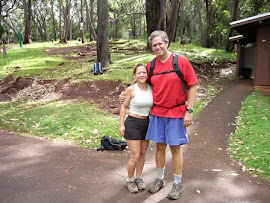